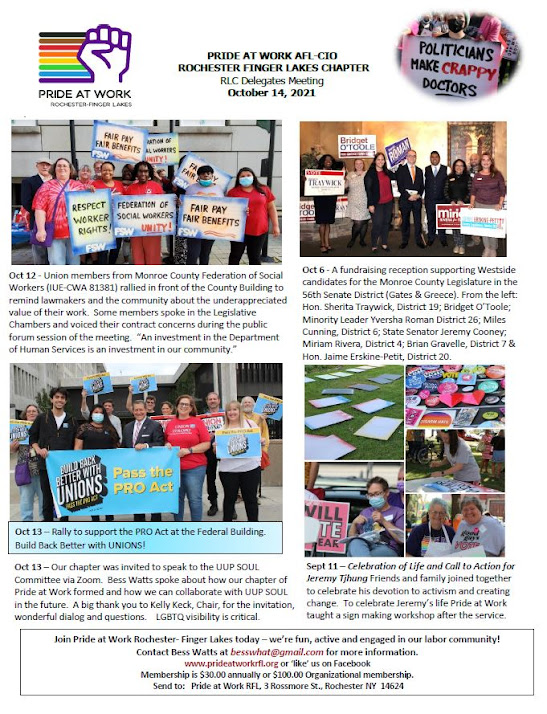 Click here for a PDF version of the report. 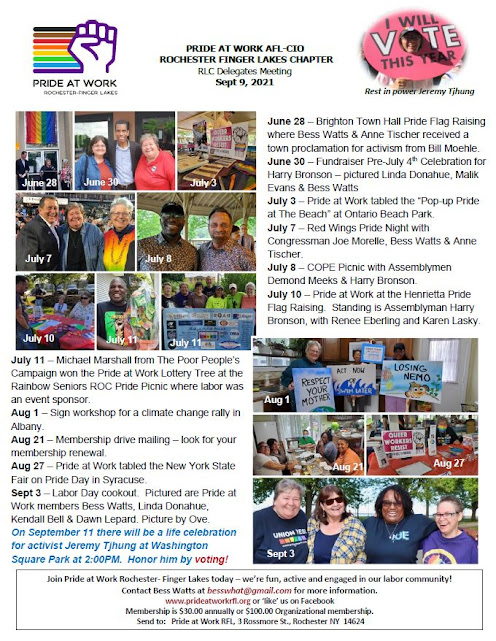 On Saturday, August 21 the membership committee prepared and mailed membership renewal letters.  Look in the mail for yours.  If you would like to join our chapter, you can do so online - please click the logo on the right and be sure and select (Rochester - Finger Lakes) while filling out the application.  If you would like to have a membership form mailed to you please contact Bess at besswhat@gmail.com. 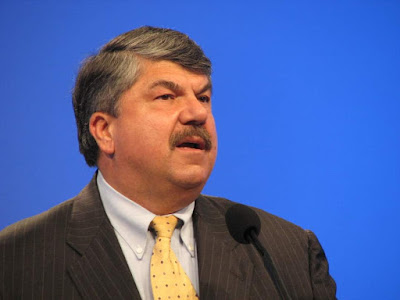 Our chapter was a sponsor for the Rainbow Seniors ROC Pride Picnic.  Despite the rain it was a hugely successful event! 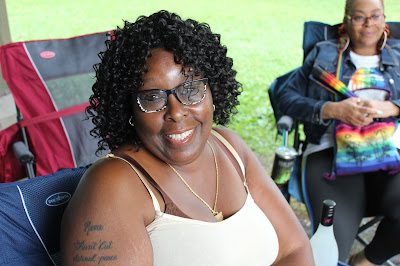 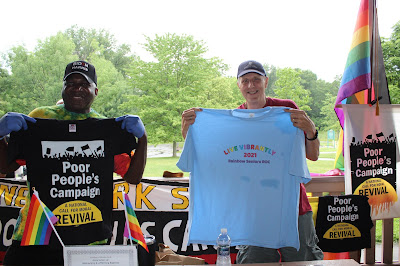 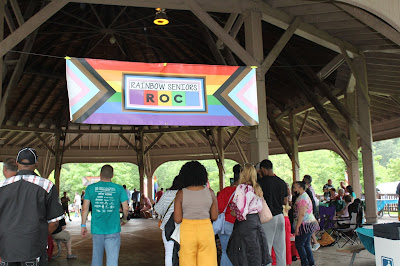 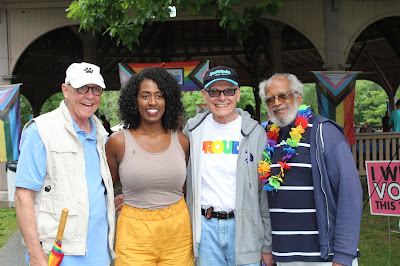 On June 28th Bess Watts and her wife Anne Tischer were invited to the Town of Brighton Flag Raising event to speak.  They were also presented with a  proclamation by Town Supervisor Bill Moehle for their work on marriage equality, LGBTQ rights and labor. Bess and Anne participated in the unveiling of the flag in front of the Town Hall. 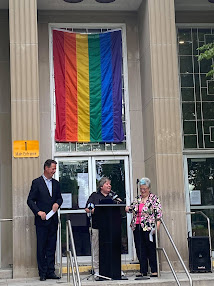 Speeches from Bess & Anne:  Thank you for this invitation we are so happy to be here.  As a former Local president of CSEA local 828 Monroe County, I have great appreciation for the Town of Brighton, Brighton Department of Public Works was always one of my favorite units. I would like to acknowledge Sonia who is here and is one of the few women who work in Public Works plowing the roads and working for the community. She is a very hard worker.  I also have ties to the Town of Brighton as a retired employee of Monroe Community College.

My current title is President of Pride at Work AFL-CIO Rochester Finger Lakes Chapter, Pride at Work is a constituency group which advocates for LGBTQ issues in the workplace. I was once told to my face that we have no gay Union members. We were established over 12 years ago because there was a distinct lack of LGBTQ voices and visibility for workers who were covered under a Union contract.   Pride at Work acts as a liaison between labor and the LGBTQ community.   You do not have to be LGBTQ to belong to Pride at Work but you must support workers.

We’ve made great gains over the years in workplace protections, often with the Town of Brighton taking the lead whether it was domestic partner benefits or non-discrimination language in contracts.  Brighton has proven to be a great partner for LGBTQ and all workers and it has been appreciated.  Thank you.

Of all my titles the most important title is being the wife of Anne Tischer, we’ve been together over 27 years and I affectionately call her Atilla my Hon.

Our motto is “Live vibrantly at every age”…and we have been successful at that…   though it is a relatively easy thing to do today thanks to the wave of equal rights protections that have washed over LGBTQ+ people in the last couple decades. 20 years ago that was not true for us… LGBTQ people could not live authentically as equally valued members of society.

And that was how 20 years ago Bess & I became “accidental activists…we just wanted domestic partner benefits at Monroe County College where Bess worked, so I could get some health coverage as her, then partner, of 10 years.

The County kept saying NO – they refused to recognize same-sex relationships.  The result: with every “no” we became better activists…tried new approaches, formed new organizations, found allies, learned how to create political change.

We are proud to have been part of the movement that resulted in obtaining thousands of federal and state rights and benefits for LGBTQ+ people…marriage equality, military equality, employment non-discrimination benefits, student protections.

And We quickly learned the value of allies….people who would open doors or speak openly for for lgbtq people who may have lacked the confidence to come out of the closet to speak for themselves.

We first met the amazing Sandra Frankel when she came to lobby for domestic partner benefits at the County Legislature….talk about lifting our confidence & resolve!  Sandy had our back.

And when the fight for marriage equality took top billing…there was Bill Moehle…constantly speaking on our behalf & offering his legal perspective as we educated the public about marriage rights denied to same-sex couples.

And we want to call out the townsfolk of Brighton who were in the vanguard for advancing equality and equity for LGBTQ people…The Churches & synagogues in Brighton were the first to offer educational events & visible support for equal marriage.

That was no surprise to us…Brighton has always been the torch bearer for human rights…LGBTQ families, Black lives, trans kids, immigrant rights, worker rights,   people in Brighton value human beings and social justice.

We are proud to stand here and say thank you .

Thank you  for giving us LGBTQ+ seniors the opportunity to “live vibrantly” …with respect, security, authenticity and equity and equality. 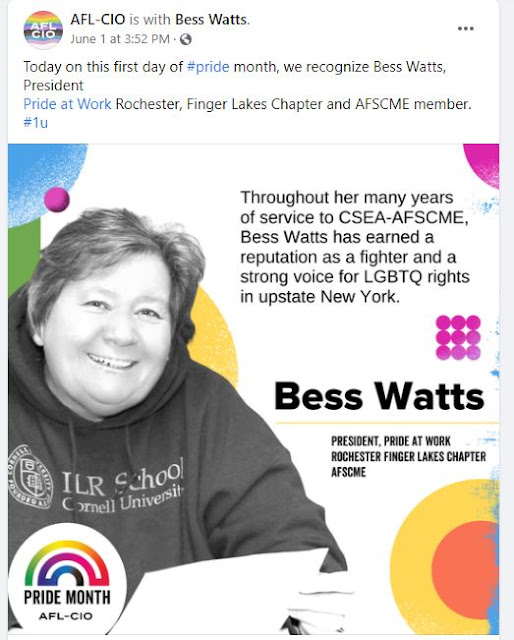 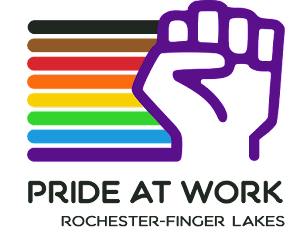